Operating out of one station in Bradenville, we are responsible for the 105 square miles of Derry Township. In the township, we have approximately 14,560 residents, and run an average of 550 calls per year. We own 2 rescue-pumper trucks, one of which is utilized mainly as an engine, and the other as our rescue. We also have a tanker truck, attack truck, and squad truck, and utility/brush truck. The people who man these trucks are 36 active members that volunteer their time to making the township a better place, whether it is through running fire calls, assisting people, or working events throughout the township. All of our personnel are trained in firefighting operations and hazardous materials, and most of our personnel are trained in EMS, vehicle rescue, and wild land firefighting. We also have 12 members that are trained in swift water rescue and boat operations. These water rescue members are part of the Westmoreland County Team 175, which also includes New Alexandria VFD, and Lloydsville VFD. They can respond to anywhere in the state if requested or required.

The mission of this department is to:

The purpose of this website is to help this department achieve its mission goals and to honor those who have helped over the years to make this department what it is today.  It's primary objective is to convey life saving information on the natural and man made hazards that have the potential to affect anyone at anytime.  It will serve as an interface between the Bradenville Firefighters, fellow fire and emergency service personnel, and the citizens of the area.  It will also serve to keep the community updated on the current activities of the department such as training, fund-raising, and emergency response.  Call postings will be such as to provide a vicarious means of learning. 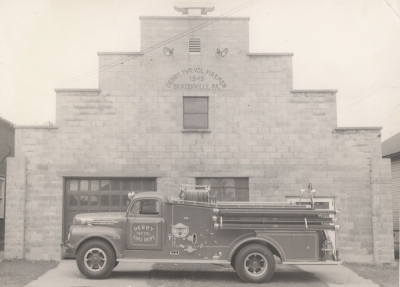 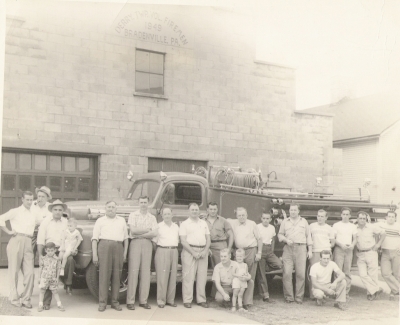 A group of men from the Bradenville area held a meeting on February 14, 1938 to establish what is known today as the Derry Township Volunteer Fire Department Company #1 of Bradenville. Mr. Robert Jenkins presided over the meeting as chairman to have nominations and elections of officers. Mr. Harry Hull, of Southwest Greensburg VFD, who was 1st Vice President of the Westmoreland County Fireman's Association, swore in the newly elected officers. Mr. C.W. Hysong and Mr. Harry Snively of Southwest Greensburg VFD, Mr. Meyers of Hermine VFD, and Mr. Charles Loffer of Manor VFD each gave a talk; and each donated one dollar to the company establishing their first saving of four dollars.

During the early months of the department, the men held meetings every other week. They paid dues of ten cents per month. They joined the Westmoreland County Fireman's Association in March of 1938; making at the time 55 departments in the association. They established by-laws and regulations for the operation of the department. In April of 1938, they established a Fire Police and initiated the practice of ringing the church and school bells for alarms.

The main concern for the department at this time was to establish a good financial backing for the purpose of purchasing fire fighting equipment, trucks, and real estate. They held raffles, a musical at the Derry High School, and bingos in the old Snyderton Hall, (the present Slovak Club). On July 5, 1938 the department received its charter with eleven members signing. Afterwards, they continued to raise monies for the department, and educated themselves as to what types of equipment they should purchase. Then, in August of 1940, the Department purchased property form the Enterprise Coronet Band of St. Clair, for the sum of four hundred twenty dollars and eighty cents. They then began discussing plans to build a hall.

Not long after, war broke out in Europe, and the U.S. involvement took many of the men from the area. During this time, the Department went into a "state of limbo". Then on June 24, 1946, in the basement of the Evangelical United Brethren Church in Bradenville, eleven of the original members assembled themselves for the reconstruction of the department. They held meetings and bingos in the old Bradenville school. They purchased an old ambulance for the Department, which later they sold for twenty five dollars. Plans for a hall were drawn up by Mr. George Gera, and in 1949 the men of the department joined together and built the hall. Also, during November and December of 1949 they established their first envelope drive. Finally, in March of 1950, the hall was finished. The practice of church bells ringing was replaced with a siren for alarms. This siren was replaced in 1958.

In March of 1952, there was a special meetings held for the purpose of purchasing a 1952 Ford truck from Central Fire Truck Sales of St. Louis for eleven thousand, six hundred and ninety six dollars.

In August of that year Mr. George Radacovich, Casper Monteparte, Michael Calabrese, and Ken Starry from the department delivered the truck and drills were held every Monday night. In November of that same year, the department began a practice of "testing" the siren every Saturday at twelve o'clock noon which was carried on for years. In 1955, the department purchased its second vehicle, a squad truck, from the Latrobe VFD, this truck was replaced in 1969 with a new one.  In 1965, the department purchased a International 4wd 400gpm High-Pressure Pumper and served as a front line suppression apparatus.  This truck also served, throughout the years after refurbishment, as a Rescue Truck and a Brush Truck.  This truck is no longer with the department.

In 1968, Pennsylvania Act 84 (the Volunteer Firefighters' Relief Association Act),  was established to provide volunteer fire departments with yearly public tax money for the purchase of firefighter safety equipment.  This Act thus created the Derry Township VFD Relief Association of Bradenville.  Although the Department and Relief Association are separate legal entities, they are both operated by Department Personnel.

On July 13, 1965 a Ladies Auxillary was formed for the purpose of assisting the firefighters in their endeavors by providing rehab support during emergencies and by raising funds through bake sales and fund-raising activities.  Twenty-two members were present:

From 1971 to 1977 the Auxillary ceased to exist due to lack of active membership.  On March 7, 1977 a re-organization meeting was held.  Those forming the new organization were:

From 1970 through the present, the Department has grown with the community and society to maintain a first class fire department.  With the advancement of technology and the increase of emergency needs throughout this era, the department has work diligently to train and educate themselves with advanced firefighting, rescue, and hazard control techniques, as well as to acquire new equipment for safer and more efficient emergency operations.  In 1978, the department joined the Westmoreland County 911 Dispatching System and was assigned the station identifier of Station 71.

The department also has a gym and land across from it for future expansion.

In 2013, Derry Township Volunteer Fire Department Co.1 of Bradenville celebrated it's 75th anniversary by hosting the 78th Westmoreland County Firemen's Convention over a span of three days.  Convention celebration events included a parade, games, bands and food at the playground.  A battle of the barrel as well as convention ending fireworks display.

These individuals have given their time to train and lead the members of this department to fulfill the responsibilities of the Charter.

Call Total for this Year:

This site has been viewed 519,464 times.
Calls
News
Pictures
Apparatus
Maintained by the members and staff of Bradenville Fire Department. Designated trademarks and brands are the property of their respective owners. Copyright © 2006-2022. YourFirstDue Inc. All Rights Reserved. Content on this web site is supplied by Bradenville Fire Department. YourFirstDue Inc. cannot be held responsible or liable for any content, text, pictures, or any other media found on this web site.
Management login
Powered by